Consider the advantages of Continuous Mixing equipment from Exact Mixing which can help you produce a finished product with a more consistent weight, size and texture, and save space, money and energy.

Batch mixing is a process in which ingredients for a single batch are loaded (either at once or in a pre-defined sequence), mixed, and discharged from the mixer before introducing another batch. The time between batches often results in inconsistencies in batches due to processing variations and controlling mechanisms.

In comparison, Continuous Mixing is the process of continuously metering ingredients directly into the mixing chamber and generating a continuous stream of mixed product at the exit of the mixer. This results in even dough hydration, better integration of minor ingredients, and eliminates the dough variables caused by batch mixing. One mixer can feed multiple lines and can be operated with less labor and energy than batch mixing.

Cookies, Snacks, Fillings: Our most versatile mixer, the MX Continuous Mixer, is designed for mixing a wide range of products including cookies, snacks, cake-style donuts, batters, icings, pastes, peanut butter, pie fillings, and other fat/sugar mixtures. Solid ingredients are quickly blended into solid fat to form a uniform mixture without creating excessive heat. It is also used for products where inclusions are a large portion of the recipe. Inclusions can be added near the exit of the mixer to obtain a uniform mix with no damage.

Buns, Breads & Rolls: Exact Mixing offers the HDX Continuous Mixer which is designed specifically for mixing ultra-high absorption, highly developed dough, such as for breads, hamburger and hot dog buns, hard rolls, English muffins, tortillas, multi-grain products, and similar products.  This two-stage system mixes all ingredients into a uniform mass in the first stage with a twin-screw mixer, and then, in the second stage, kneads the dough to the proper development level with a single-screw mixer.

To learn more about the advantages of Continuous Mixing equipment from Exact Mixing, call us at (01) 610-693-5816 or contact us online. 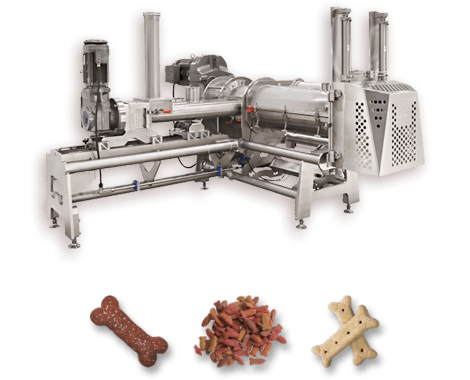